You are here: Home / Nonfiction / The Land Holds My Memory 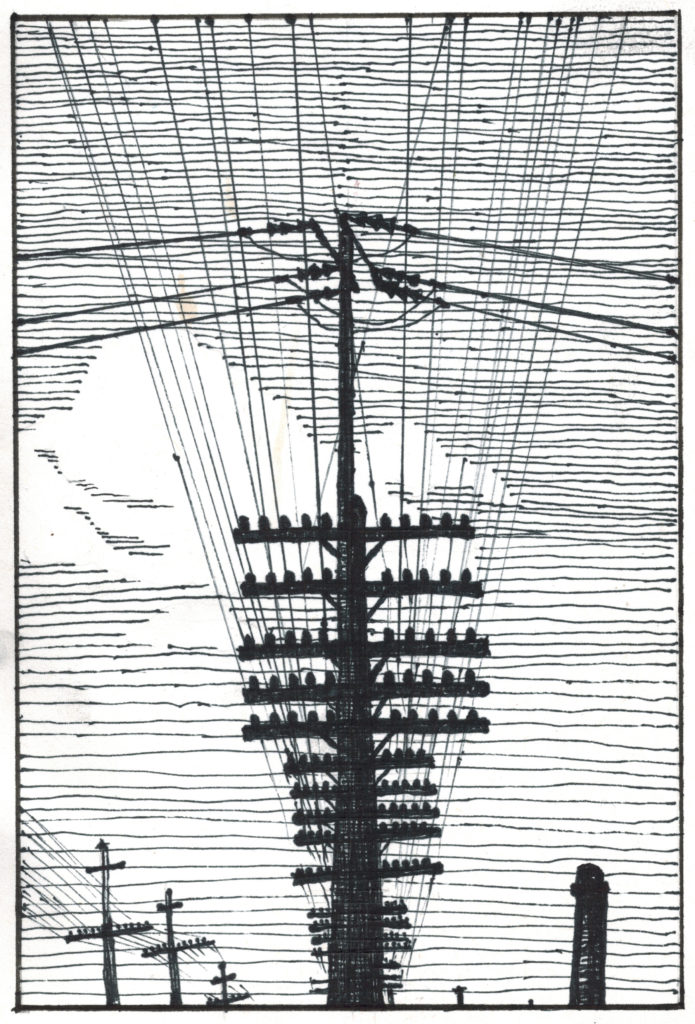 Somewhere there are photos, color slides taken in the late 1960’s of me sitting on top of a large rock. Buck teeth, hair held back from my face with a kerchief, and scrawny legs. My parents have just purchased a piece of land. It is a nice lot, seven-eighths of an acre in Truro, Massachusetts, near the tip of Cape Cod.

Every July during my childhood we’d visit this land to pick blueberries. We could pick them near the dunes, but these were our blueberries. The lot began at the top of a hill and sloped downward toward wetland. A road marked the bottom perimeter. The rock, as tall as my father, sat on the opposite side. Prickly blackberry vines ran along the edge of the marsh, weaving in and out among the poison ivy.

In the distance is Corn Hill, the famous spot where the Pilgrims in search of provisions found corn, the buried seed stock of the Nauset Indians, before sailing toward Plymouth. A plaque at the base of the hill tells the story of their “gift” of corn. The native population was decimated by the arrival of Europeans spreading disease.

My parents couldn’t afford a view of the water, so they picked a lot facing the protected wetlands. From my perch on the rock I can look down on my parents’ heads and in the opposite direction look clear across the marsh. I can see orange, gray and yellow birds in flight and the brown tips of cattails. The colors blend into a woven landscape of dark and light.

I have childhood memories of walks in the woods. The emergence of mushrooms after a rain, the fragrant smell of pine needles as  I hunted for baby toads. My father made sketches of the house they planned to build, and I imagined waking up to the sounds of bird calls. The pencil drawings stayed in a drawer.

Meanwhile, the other neighbors built their houses. A previously blocked fire road brought more traffic. Large lots were subdivided. Dirt roads were replaced with hardtop and erosion changed the landscape.

The arriving Europeans who settled on Cape Cod came with plans to tame the wilderness. While many made their living as fishermen, there were also farmers. They chopped down trees to build houses and beneath their feet the sandy earth began to shift, creating the sand dunes. They had no idea how important the trees and native vegetation were to stabilizing the soil.

In 2007 my husband Peter and I started to build a house, and he explored the terrain across the road. The start of the wetlands was not where I remembered it from childhood, and I felt disoriented by the changes. Inexplicably the large rock in my childhood photos had vanished.

The blackberries were gone, replaced with brush and hardwood.  So many trees took root in the expanse still considered a marsh. The view I remembered had been erased. But across the land wild things still grew; cranberries, blueberries, scrub pines, pokeberry, goldenrod, and thistles. I looked for the gullies where I remembered the vines.

Soil erosion from the houses built during the past fifty years, roads and traffic changed the landscape. It’s since filled in the wetlands. I am the witness.

Although we tried to keep the landscape as natural as possible and plant native species—beach roses, bayberry, and daisies—in soil displaced by construction, just by building on the land we altered the environment once again.

Our three children were too old, by the time our house was finished, to take for walks to hunt for toads, but they have used it for weekend getaways and a place to quarantine during the coronavirus pandemic. Perhaps one day we’ll take our grandchildren to dig for quahogs at low tide and show them where rosehips can be gathered to brew delicious tea.

Change is inevitable. Sandbars move and cliffs of sand crumble. Beach shores erode as the winds shift and the sea level rises. Soil has seeped into many of the Cape Cod marshes. I remind myself to embrace the unexpected. Adapt.

Deer still hide in the Truro wetlands. I spy them while walking at sunrise and at dusk. I hear coyotes at night. When the trees are bare, from my deck as the sun lowers itself in late afternoon, the light reflected off the cattails and tall grasses shimmers with warm, gold hues. While breakfasting I hear the twittering, hooting and calling of multiple birds and see flocks of wild turkeys rambling over the land.

“Isn’t this the rock you keep talking about?” Peter says.

“How did it get there?” I ask. The boulder Peter finds is set back ten feet from the road. If he helps me to keep my balance to gain a foothold, I can hoist myself up and once again sit and look out across the waving reeds toward Corn Hill.

Hidden behind tall trees and bushes, the large rock I remember from childhood has never moved. The world around it changed.

Nadja Maril is a former magazine editor and journalist living in Annapolis, Maryland, USA. She has an MFA in Creative Writing from the Stonecoast Program at the University of Southern Maine and her short stories and essays have been published in a number of small literary magazines and anthologies including Change Seven, Lunch Ticket, Raconteur, Thin Air, Instant Noodles, Defunkt Magazine, Lumiere Review, and Burning Love and Bleeding Hearts. She blogs weekly at Nadjamaril.com and is close to completing her first novel Diogo’s Garden. Additional credits include two reference books on American Antique Lighting as well as two children’s books.