You are here: Home / Nonfiction / Reading Between The Lines 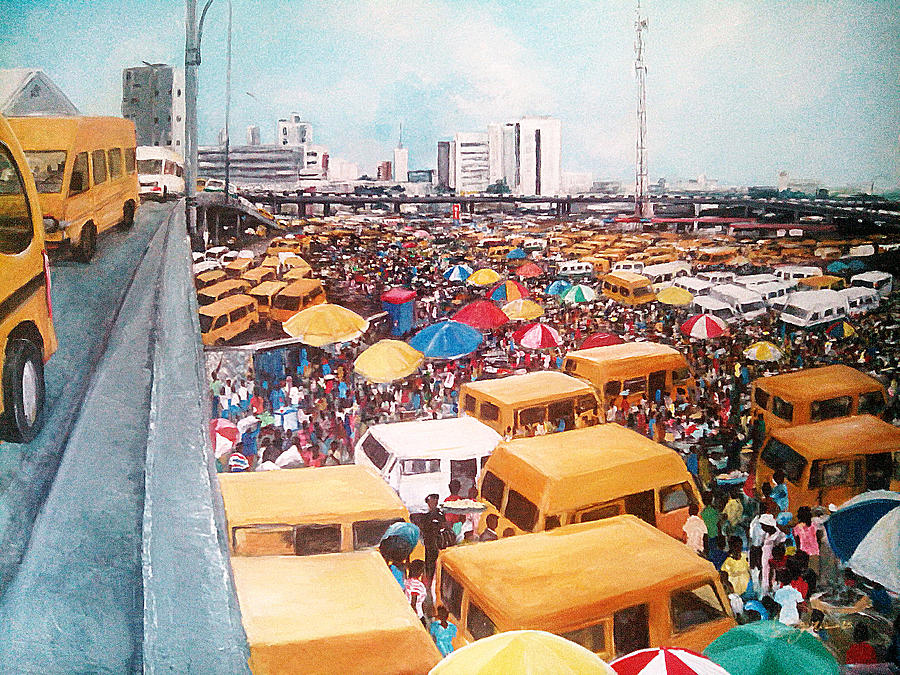 “…They were like why do you find this hard, it is just reading. What’s wrong with you?”

Obalende is the epicentre of Lagos—Nigeria’s most commercial state. It epitomizes everything Lagos is and it is where Sarah** was born. The sidewalks in Obalende are littered with market people who display their paltry wares to consumers—pedestrian and in transit. The roads are narrow, and cars barely fit their width through with ease. Strays from all around the country find shelter underneath the bridge that rests on the weight of lost dreams. They are willing to do anything for money and they are here to live the fabled Nigerian dream—journey to Lagos a nobody and through a happenstance sequence of events, you amass wealth and become somebody. Obalende did not offer many things asides noise pollution and decrepit high-rise residential buildings but it proudly flaunted all the elements of Lagos—a lack of orderliness, heavy traffic, and most importantly, hope in spite of strife. For young children, Obalende’s proximity to Ikoyi, arguably Africa’s richest neighbourhood, offered them the opportunity to witness opulence and affluence at its peak but never a chance to partake in it. A few months after I graduated from University, I worked on a contractual basis as a content creator at one of Nigeria’s foremost broadcasting organizations, it was here that I met Sarah, who was also an employee at the radio station. Her peculiar nature and her reclusive nature during social gatherings drew me to her. Sarah was born into a struggling family of five. With an absent father and an uneducated mother, Sarah knew the only way to a life of comfort was through education. She held aspirations of being a voice on the radio—a voice of reason to Nigerians, and a voice of hope to the people in her community.

In Nigeria, education is more forceful than it is effective. The quality of education is globally sub-standard but parents that could afford to send their kids to school still had to, with hopes that the education would be the ticket to a job that would make life less uncomfortable and subdue some of the hardships Nigeria brazenly offered. Education is almost ostentatious in Nigeria; the name of a child’s school is a reflection of a parent’s weight in society and parents lord their wards exceptional academic performance over each other. In a country where almost forty percent are illiterate and sixty-nine percent live below the poverty line, education is seen as a lottery ticket out of poverty but for Sarah, this path was not as straightforward for her as it was for her peers. She struggled to grasp basic concepts such as reading and writing. Why? She was dyslexic but she would only discover it after completing her primary and secondary education.

According to the Mayo Clinic, “Dyslexia is a learning disorder that involves difficulty reading due to problems identifying speech sounds and learning how they relate to letters and words (decoding). Also called reading disability, dyslexia affects areas of the brain that process language. Most children with dyslexia can succeed in school with tutoring or a specialised education programme.”

Nigerian parents resort to whatever means necessary to ensure their kids are academically brilliant—verbal abuse, physical abuse, and oftentimes hiring teachers for after-school lessons. As a dyslexic child, Sarah suffered through all of these. “My teacher called me a beauty without brains and somehow that has always stuck with me.” Unable to find an improvement for her child’s condition—after pent up frustration let out through verbal abuse and hiring pricey after-school tutors that she could not afford—Sarah’s mother turned to the Nigerian solution to any problem, prayers to God. “I hated that she left it all to prayer, we both knew this required action and not prayers” Sarah lamented.

“…We need more special needs schools, but who is going to fund it?…”

The Guardian Nigeria claims that about 90% of Nigerian teachers do not know about dyslexia. Despite attending a public school within Africa’s richest neighborhood, Ikoyi-teachers struggled to figure out Sarah’s condition throughout her primary and secondary school years. She was promoted to the next class based on her sheer exemplary character and not the strength of her grades. Esho Monisola, a veteran secondary school teacher with over 34-years of experience, despite being fully aware of what dyslexia is, ardently believes that the majority of public and private school teachers are unaware of the condition but she does not entirely fault the teachers for their lack of knowledge. She believes the government and parents also have a crucial part to play. “There was a population explosion and the number of schools did not increase, so there are more students than there are teachers. These teachers cannot devote as much attention to a student as they should and the government does not care. The parents as well need to do more, they spend more time with these kids. Once they notice these traits, they should not be ashamed but should instead look to work on them. We need more special needs schools, but who is going to fund it?”

The International Dyslexia Association estimates that 15 to 20% of any population suffers from dyslexia—over 36 million Nigerians are expected to suffer from dyslexia. Sarah fully understood her condition after speaking about her problems to her mother’s boss who involved his wife, a teacher at a school for dyslexic students abroad. After figuring out what her condition was, she needed a community where she fit in seamlessly. In search of a place to fit in, Sarah hunted for a community of people just like her. She found two on the internet Dyslexia Nigeria and Dyslexia Foundation Nigeria; both non-profit organisations. Sarah tried to reach the latter but she was received with echoes of silence, an oversight on their part perhaps because Ben Arikpo—founder of Dyslexia Foundation Nigeria—has incessantly tried to champion dyslexia awareness through radio and television programs after discovering his son was dyslexic. She, however, got feedback from the former but all they offered at the time was a promise to stay in touch. They soon contacted her about a one-day seminar that would cost her about $20 to attend, but with her financial situation, the price was too steep for her at the time.

“…I thought of quitting after my first week…”

After a happenstance sequence of events allowed Sarah to meet her idol, a radio host who was also dyslexic, Sarah’s confidence skyrocketed. She then maneuvered her way through University in the neighbouring country of Cotonou after being unable to pass the pre-requisite exams needed for admission in a Nigerian university. When she completed her tertiary education, she returned to Nigeria. Fully aware of her daughter’s condition and inspired by her daughter, Sarah’s mother enrolled for adult education classes but she has recently discovered that she also is dyslexic.

Upon Sarah’s return, the country’s economic situation had worsened, it was imperative for her to get a job to support the paltry financial income her mother could gather. She applied everywhere and anywhere that was willing to take her and she eventually landed an interview at one of the foremost radio stations but it was for a job that would require her to read words off a piece of a paper at a pace she had never read before. “At first, they were like why do you find this hard, it’s just reading. What’s wrong with you? I thought of quitting after my first week but I stayed because of my friend and one of the on-air presenters who encouraged me to brave the storm.”

It has been two years since Sarah started working at the radio station. Most of her colleagues are now aware of her condition, and this has somewhat made the job a little less difficult than it should be. “Immediately we go off-air, they are like, are you okay? Do you need to breathe? Okay, fine. This is your next one.” She laughed as she spoke, a resounding laughter that bellowed confidence in her job. Sarah has enrolled for an online class to help her through her condition at a pricey cost of over $200, she gathered the money from her savings over the years. Although her inability to afford a laptop has hindered the progress of her class, she stays behind after work and even comes to work on weekends just so she can keep track of her course.

Sarah is hopeful that this course would help her overall reading and writing ability and eventually broaden her uncertain career prospects. Due to the current COVID-19 pandemic, Sarah has been retrenched from her job, and she is in currently in search of a new one as she seeks to find money for subsistence and to keep on track with her online learning.

**Name has been altered for the sake of anonymity and fear of public humiliation.

Ifeoluwa Falola is a Nigerian writer focused on telling African realities. Having been published in international and local magazines, Ifeoluwa feels like he is a voice to a generation that only now acknowledges what it is to be African.