You are here: Home / Nonfiction / Meditations on Trash in a Time of Dumpster Fires 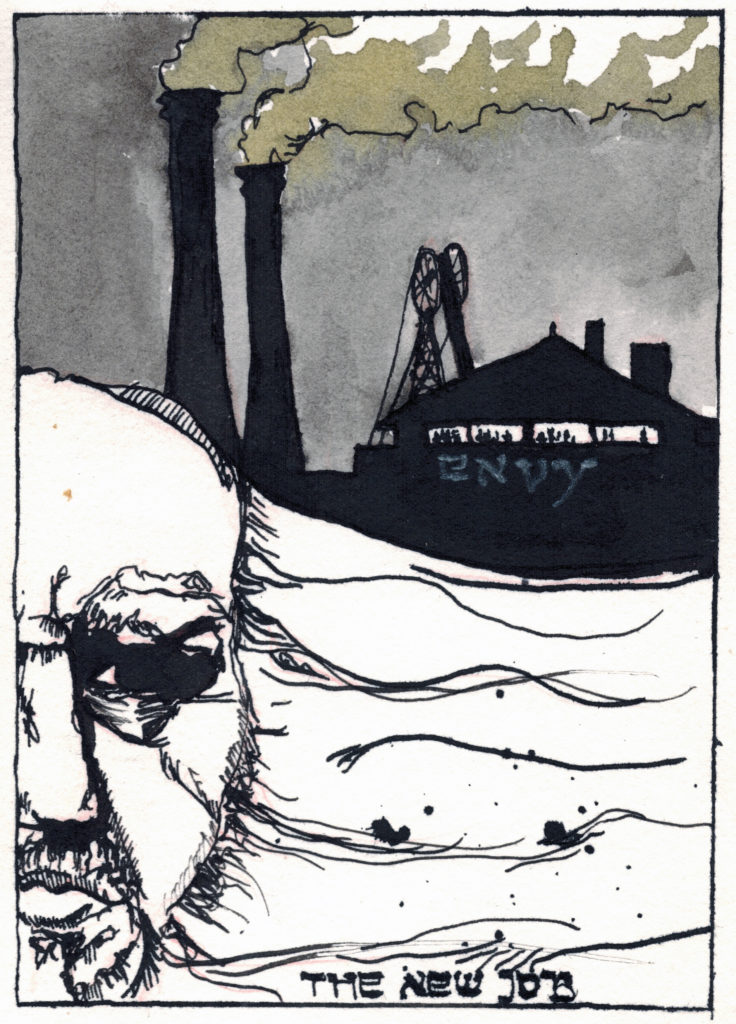 Just before seven a.m., I hear the garbage truck. I’ve already taken the black bin to the curb. The old hockey bag spread inside the front entry for the past month didn’t fit, despite the fact I’d been dismembering it for weeks, disposing of it in serial-killer pieces. A strap, a zipper, a flap of soiled canvas. All that’s left is the plastic frame and the wheels. Braless, I pick up the bag, and sprint barefoot down the driveway. The garbage man pulls up. His truck is a side loader. He releases the lift, the fork snatches my bin, hauls it up and away. I stare at the black hole of the hopper, the hockey bag clutched in my hand, and then make eye contact with the driver. An appeal: may I?

A memory of a mouse inside a white bag of trash. Tiny gnarled claws splayed against plastic, grainy and stretched. Like a damsel in distress, a Hollywood horror. A hint of whiskers, the shadow of a tail, wriggling. Help?

The fire department responds to a dumpster blaze on a Saturday afternoon. They put out the flames, creating a foamy mess. Garbage pho. They reel the hoses in, head back to the station, file a report. But they never saw that it was a man on fire, not trash. They never saw the body of the man who’d been reported missing the night before, the boy I went to school with. Skateboarders find him charred, floating in the garbage on Sunday morning. Dead. He was twenty-five years old.

A Maritime storm. The rain falls in icy sheets, sideways. The wind is a whip. Our empty garbage cans, round and flimsy, roll down the street and cavort with the neighbors’. The bins exchange lids, mix smells, share secrets. The woman in thirty-six has been binge eating again; thirty-four’s on the sauce (six empty bottles of Smirnoff and a shattered quart of whiskey); twenty-seven’s in five-digit debt. The bins roll back and forth in the middle of the road waiting to be rehomed. At five o’clock, a father in a three-piece suit wrangles a pair of bins back up the street. His metal glasses are fogged. He has the wrong lid.

In a Virginia Beach nightclub, a man calls me trash. He doesn’t know me. The muscles in his neck, the frenetic movement of his pupils, the waving finger tell me so. The way he enunciates the ‘sh’ in trash, the way he tells me to shhhh.  I’m in a group of girls: friends, teammates. Only one of them stands up for me. Only one follows me to the bathroom and tells me I’m not trash. Tonight, I learn the fragility of female friendship, the limits. The dark joy girls feel when another gets her comeuppance.

I am seven and hear the garbage truck winding down the hill. I race outside to watch. My classmates want to be hockey players or horseback riders, dentists, lawyers, traders. I want to be the garbage man. It is the eighties, and the truck is a rear loader. The garbage men ride on the back like soldiers liberating an allied city, World Series champs in a homecoming parade, trash heroes. Their chins are lifted, their chests proud. They wave to their fans, the children, the dreamers. They wave to me when I give chase. Sometimes they keep only one foot on the footplate, so that the other hangs dangerously in the air, teasing the pavement racing beneath their suspended steel-toed boots. Can I try?

I get off the ferry in Bequia in the West Indies, in search of pottery. Not the shards and broken bits I’m drawn to on the beach, but whole pieces, smoothed, glazed, tagged. I follow directions from the terminal, up a hill, to the left, a sweeping curve. I stumble upon a dump, where pigs the size of trucks feast. I’ve never seen pigs this big outside a petting zoo, outside a fence. Their ears flap and their snouts curl up like the shoes of elves. I veer as far from the dump as I can, while staying on the path to the potter’s house, unsure of what the pigs will do. Charge? Bite? They do nothing but nose their way through the garbage under the smoldering Caribbean sun.

When I was lucky, my father would take me to the city dump—a partially roofed drive-thru facility on the Halifax Waterfront. We’d pull up in the Oldsmobile, park, pop the trunk. He’d guide me to the edge of the pit, and coach me how to throw the bag so that it went some distance. How satisfying it was to sling the bag, to watch it tumble, come to a rest. To bury the past.

I wrap my wedding ring in a fast-food napkin. I am late for soccer and have forgotten to remove my jewelry. No sports bag. I figure if someone breaks into my car, the last thing they’ll do is steal a napkin. I play soccer, win. When I get home, I set the ring, still wrapped in its napkin, on a ledge inside the hall. The craft bin’s been tipped. A pair of rogue preschoolers, mine, are graffitied like rail cars, marker on cheeks, paint on fat toes. A weary grandma, clutching a diet coke, sits defeated on the couch. We’re cleaning this up. I grab a garbage bag, sweep feathers, pluck sequins from tile cracks and hall vents, dump paint, brushes, Styrofoam plates. I take the bag straight to the curb. Tomorrow is garbage day. I hate crafts. The next evening, I drag the empty black bin to the side of the house. I kick my flip-flops off in the front hall, rest my hand on the ledge. The tan line on my finger reminds me I forgot to put my rings back on. The fast-food napkin’s gone. Fourteen karat grief pulls me down. There’s still glitter on the floor.

Garbage men—they were all men back in the day—grizzled and muscled and Salisbury-steaked, seemed no more than large children. Hanging off the back of the truck seemed juvenile and dangerous, the work of lost boys and rebels, the nimble and strong. I imagined their mothers tied the laces of their steel-toed boots and sent them to work with ham sandwiches on white bread they could chew like gum, carrots peeled and cut into sticks. I fantasized that maybe every day was a field trip, and their mothers slipped full sized Coffee Crisps into their lunch boxes.

There’s a garbage strike on the island of St. Vincent. In Kingstown, sewer rats and hair product run through chicken bones, fruit peels and pineapple crowns that crowd the open drains. Garbage bags piled six high, bleed. I stagger off a ferry, food-poisoned, seasick and dehydrated. The only thing I’ve eaten in days is a single leaf of lettuce from the Frangipani hotel. I hike uphill, gagging, heaving in the heat, past garbage, past birds and feral cats. Downhill, I puke. In a ditch, in a drain. A taxi driver heckles. He thinks I’m homesick. He thinks I’m drunk. On Vincentian cocktails. On Hairoun beer. Damn tourist! He yells out the window, slapping the car door, while I sit on the sidewalk beside last week’s trash, wiping drool from my chin.

A bag of garbage slumps on the roof of my car at three a.m.  I am parked behind a seafood restaurant. Sober. Everyone else is port-city drunk: students, vagrants, sailors, seagulls. People laugh at the garbage car. They see that the bag is split. They point at the contents spilling down the windshield, festooning the hood. When no one’s looking, I remove the bag and toss it to the sidewalk. Remnants of shrimp cocktail are caught in my wiper blades.

Lounging in the pink house, listening to California ska punk, I smell smoke, pause, check rooms, step outside. The garbage bin is on fire, just. Call 911. Knock on doors, save my neighbors, smoke a cigarette while the men in black and yellow put out the fire. Wonder how I missed her. The arsonist. Search the crowd. Search for the girl with the wild hair. Search for the one smiling. Give a statement, but never find the instigator. Know she is a step ahead, setting a couch ablaze.

A man’s body shows up in a Delaware dump. He is bloated, well-dressed, presidential.  Blunt force trauma, white hair. How did he end up in his landfill resting place with half a dozen Big Gulps, and a burnt-out microwave? What happened to you Jack? How’d you go from the White House to the underground? How’d you forget where you parked your car? What happened to your briefcase?

Where on earth are your shoes?

A memory of a white plastic garbage bin, textured, a gold swirl. It’s not beside the bed where it should be, where I’ve spent all night puking into it, thirteen, wasted. Hung-over, a child in bed. Young enough for sticker books and stuffed animals. Old enough to empty the garbage. My sister hovers over me: You have to dump this before Mom and Dad get home. I want to tell her I’m too sick, but she only shoves the garbage can closer. Hurry, she urges, they’ll be home soon. I stumble out of bed, green as a billiards table and smelling of Southern Comfort and cigarettes, carry the garbage can downstairs and out into the backyard. My last night of childhood drips from a lilac bush.

Ali Bryan is an award-winning novelist and creative nonfiction writer who explores the what-ifs, the wtfs and the wait-a-minutes of every day. Her first novel, Roost, won the Georges Bugnet Award for Fiction and her second novel, The Figgs, was a finalist for the Stephen Leacock Memorial Medal for Humour. Her debut YA novel, The Hill, was longlisted for 2021 Wilbur Smith Adventure Writing Prize. She lives in the foothills of the Canadian Rockies, where she has a wrestling room in her garage and regularly gets choked out by her family.