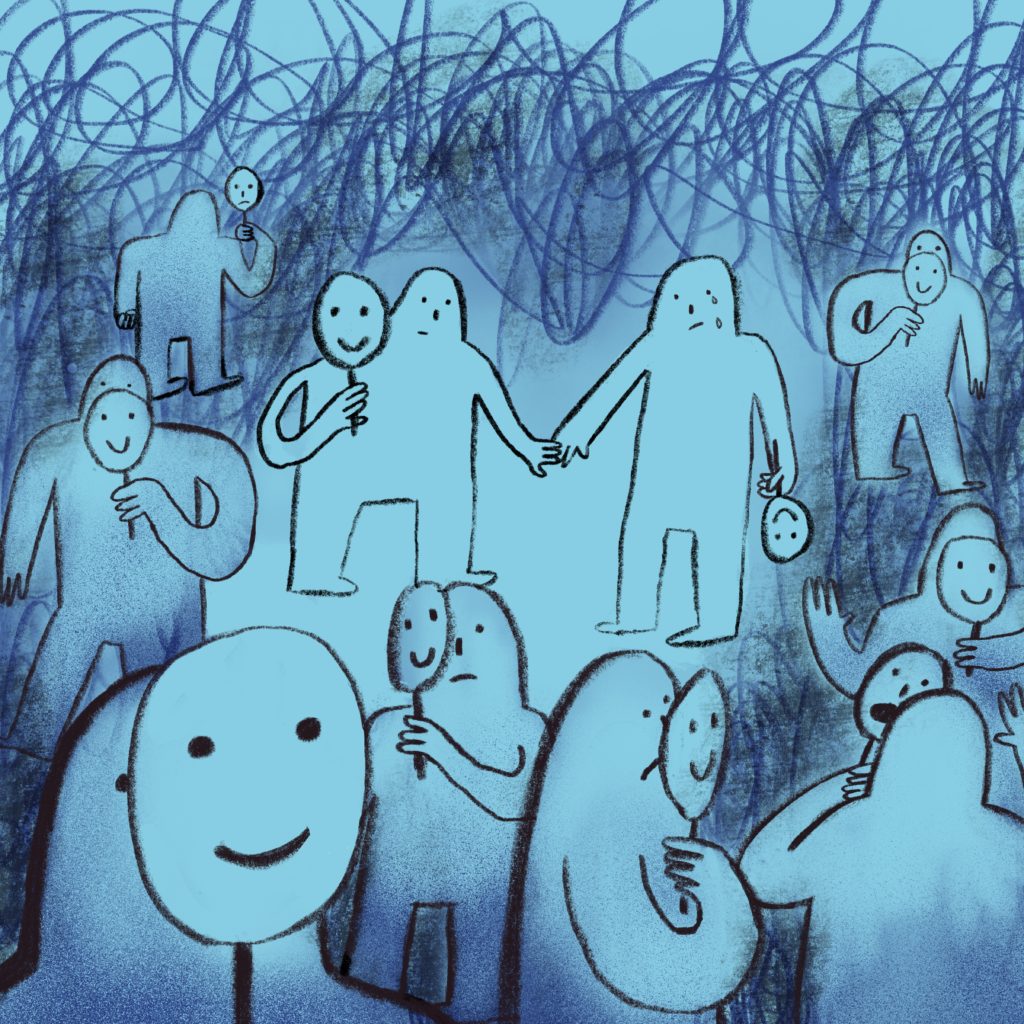 The voice hangs in the air, speaks twice, before I realize that it is addressing me. The words come from a woman who has just squeezed in beside me on the concrete bench fixed to the subway platform. Many pounds overweight, hair crayon-yellow and frizzed beyond combing, she eyes my white pants and shoes, her eyes rimmed round with blue pencil like a child’s drawing.

The crowd waiting for the train with newspapers held aloft, eddies around us, quiet.

“My mother is a nurse.” Her mouth purses in a prim smile. Then, “You’re not a Christian Scientist, are you?”

Without waiting for my answer, she continues. “I’m not, but I believe in their teachings. No stimulants, for one thing. No coffee. I’m a purist. Do you drink coffee?”

Even though I know she is mentally unstable, I feel a quiver of irritation. I am wrung out after three twelve-hour days on the ward. Shortly before the end of my shift, I listened to a dying patient’s mother declare by telephone from Iowa that she and her husband would not be coming to see their son. “He has not lived the kind of life we approve of.” Her voice was toneless, hard.

The woman stares at me for a moment, then asks if I believe in abortion. Maybe it’s my imagination, but a trace of disdain seems to have altered her expression.  Her cousin, she confides, can’t get pregnant. Although, she has been trying since she had an abortion five years ago. “She certainly wasn’t going to put herself on welfare at seventeen.” The woman shoots the words at me sounding like the boy’s mother on the phone.

“Maybe she could have gotten a job.” I glance towards the empty train tunnel. I know that I am baiting her.

Her penciled eyebrows lift. She smiles deprecatingly. “You have a lot to learn.” Her tone is ominous. It is a declaration of war. “What kind of nursing do you do?” she asks, like she is gathering ammunition.

Here it is, I think, the million-dollar question. “I work with AIDS,” I say.

Her eyebrows dip in puzzlement, then shoot upwards. “Oh,” she exclaims, “you are a nurse’s aide.” Then, when I repeat my words, “Oh, you work with nurse’s aides.”

“No.” Tired of her density, her warped view of reality, angered by the prejudice I sense in her, her disconnection from what I see every day, I turn and look directly into her face, inches away. “No.” Then, stressing every word, “I nurse people who have AIDS.”

She stiffens as though she has just seen that I am covered with lice. Slowly, cautiously, reaching for the handles of the shopping bags that encircle her legs, she eases herself onto her feet. Her eyes glued to mine, as though calculating her escape from a dangerous animal whom she hopes to mesmerize until she is beyond striking distance, she feels her way backwards through the crowd.

From the far edge of the platform, bulwarked by bodies, she straightens her shoulders, throws her head back and, face contorted, shrieks, “Better you than me.” If she had stones, she would throw them.

People turn to look at us. I am shaking. Within seconds, remorse wedges itself into my anger. What right do I have to inflict my outrage on this woman, awash in fears I can’t even imagine? I chose this field of nursing because of my compassion for people living with fears I cannot imagine either. Recently a taxi driver who dropped me off at the hospital said of the patients on our unit, “They deserve what they get. I hope every last one of ‘em burns in hell.”

Each day on the unit families come who have broken through the armor they once wrapped around themselves, responding from their hearts to relatives and friends who followed the beat of different drums, for better or worse.

A train, not yet mine, glides into the station. I watch the woman climb aboard, still sending me enemy messages with her eyes.

When the Rockridge train arrives, I enter a car whose atmosphere is dense with propriety. The small press of passengers is so polite and composed, so orderly in their unruffled calm and self-possession as to seem almost robotic. Across from me, a woman reads a newspaper folded into a precise column that hides her face from me.

All of a sudden, I want to dissolve in tears. What rises in me is so unexpected that I am embarrassed, a little frightened—that a woman immersed in her reading should make me want to cry seems absurd.

The nurses on my unit know that if they allow themselves to grieve when they are working, they cannot do their job. But they talk about the odd moments on days off: neutral, unrelated, ridiculous, that out of the blue, trigger sobbing. A TV ad for toothpaste, the bad comedian on the late-night show, the bargain jeans in a thrift shop. “Just like that. Bawling. I thought I’d never stop.”

The Bay Area transport train clicks along the rails, the drone of its electronic motor as though the cars are humming to themselves. The motion, smooth as a rocket, rushes me through tunnels and between stations, from darkness into light and back.

Cecilia Worth is a retired registered nurse. The challenges of life that seem insurmountable shape both her writing and her nursing. Her essays and fiction have appeared in The New York Times, San Francisco Chronicle, Anchorage Daily News, and in anthologies by West Coast Writers and Travelers’ Tales. She is published by McGraw-Hill Cecilia lives in Brooklyn and upstate New York. She is completing a self-help book written in the voices of expectant fathers.