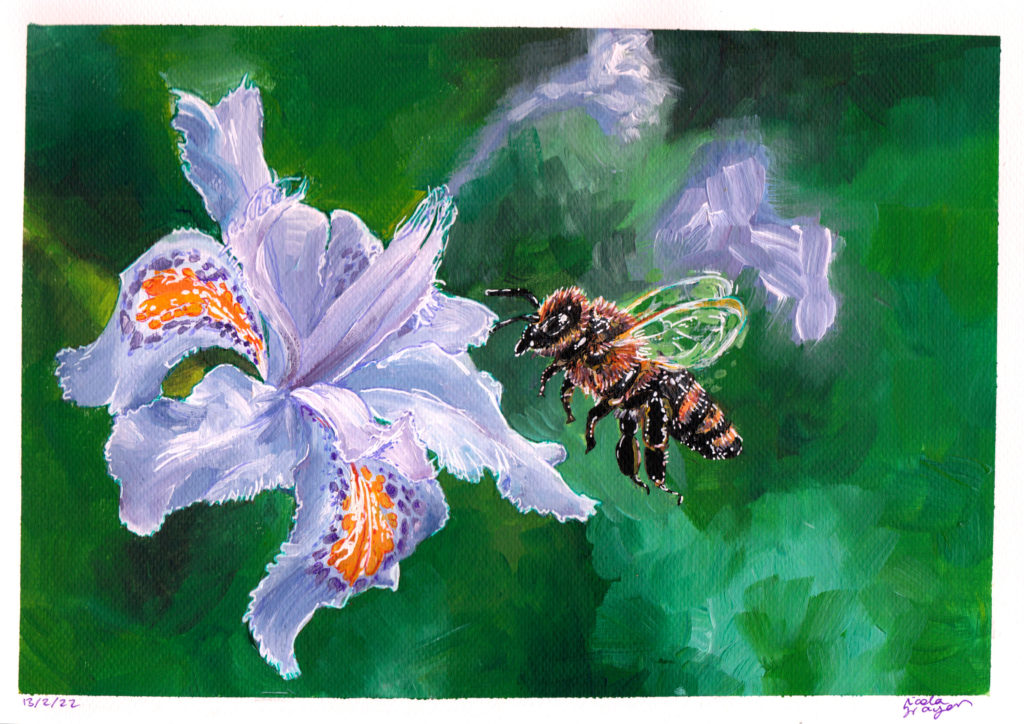 The first time you fuck is on a Saturday night turned Sunday morning. After his face finally re-emerges from the back of your thighs, he asks, am I going to catch something from this? And you want to reply with HIV, herpes, the whole works, but instead you scoff and say, what type of person do you take me for? He laughs and the cross hanging from the chain on his neck trails along the length of your torso as he lowers back down on you.

You gave it up so fast you were sure he wouldn’t come back, supposed to have been a one night thing, and anyway you wouldn’t care if he did, but he does. Like clockwork and without warning, a knock on the door any time after 10 p.m. grows expected. You never asked for his return really, but you don’t mind that he does. Before you know it you’re having him for breakfast every other morning and every night he’s back on the right side of your bed, staining the sheets with his sweat, building a home inside your warmth.

You apologize to your roommate for the constant sound of your bodies slapping together and the music of your headboard, unhinged from its base, banging rhythmically against your shared wall. You apologize to your client, who he sneaks past at the start of your appointment one morning on his way out the door. You apologize to your dog for exiling him from his place on the bed, leaving only a small spot on the corner of the mattress for him to ball up onto. You apologize between most breaths because it’s what you’re used to. He tells you to not be sorry, for anything, seriously, but you can’t help it. You are sorry. Sorry is you.

You apologize after you faint on the way back from the bathroom in the middle of night and your body smacks the floor so hard it echoes into the drywall. He shushes your mumbled remorse and scoops you up from the hardwood, tucks you back under the sheets, cradles you. Even as he falls back asleep, his arms clutch your head like it could possibly roll off of your neck and onto the ground below your high high bed. You feel two fingers hover a few inches beneath your ear every few hours, just in case.

He says from the start he can’t love you and you say you like a good challenge, but you actually love it, live for it, are determined to rewrite the inner workings of his rationale in your favor. You send him pictures of Frank O’Hara poems you read from the toilet and portraits of your ass taken in your elongated mirror, the kind that makes a body look less body and more Sierra Nevada.

Validation doesn’t come often, but when it does it’s in the form of touch; a hand opening against your scalp, a quick mouth to cheekbone in between thoughts. He inches toward you in the depths of sleep, folds his body up into yours like cement filling gaps, tells you, without words, that he likes to be the little spoon. When you’re lying on his chest listening to music, he tips his head down toward you to watch the change in expression on your face. He plays you songs with the same enthusiasm you hope someone will someday introduce you to strangers with. Late late at night when you’re in different states he calls you up, wants to talk for hours, and if you listen closely enough it almost sounds like a faint “wish you were here.” Sometimes admiration slips out from under his tongue during quiet, and when it does, you hold on to it for weeks. One night in December, the time of year when California attempts to prove itself capable of cold, the temperature outside finally lower than the thermostat indoors, the two of you circuited together. Somewhere in between inhaling each other’s breath, he pulls back and mouths love. Not with an I at the front and you at its end, just love. You take it, a happy compromise, and the closest thing to an audible affirmation that may ever be echoed from his lips in your direction.

You aren’t scared of the future but he is, terrified of it actually, not certain of anything beyond sunrise, and anxious about any commitment more serious than deciding what movie to watch and even that is a feat in itself. He doesn’t talk much about what’s to come because talking about it makes it real. You hand him parts of yourself like you’re capable of regeneration and he hands you his doubt. You try warming it in your palms, try to make something hopeful out of it. It doesn’t take well to softening.

It slips out, one Sunday, that his father hates faggots. And you recoil at the sound of the word and the fact too. You don’t know what to say. You stop the sorry crawling out on the edge of your tongue but it still tumbles out, uncomfortable. Because your parents’ love for you is a privilege you don’t often acknowledge. Mostly because you don’t have to, never had to. We love you, faygala and all, your mom says and you laugh because the word’s edges are softer in Yiddish. You’ve been one, open, since fifteen so by now you’re damn good at the reclamation. I’m not one of those, he swears, pulling out of you after he’s come. And you wonder what a faggot is then if it isn’t this. Like if you don’t claim it, the title won’t attach itself to you. Faggot, a parasite only capable of leeching on if let. But that isn’t true, because if you don’t say it aloud, call it what it is when you know it, then someone else will do it for you. That’s the way the world works. To be a queer in this world is to be a light flashing in the dark, always. You can’t hide from yourself. And you think that he knows this too, but you don’t push it, instead fall back beneath his heat, cup both hands behind his ears and convince yourself that there’s a surrender in his exhale.

It’s like this for months, almost six, before the weight of it all crumbles into something you can no longer hold together in your palms. You managed to keep this, the both of you a whole, under wraps for half a year. You wonder how long you could have continued this precious secrecy had you kept trying. You wonder what it would look like had you been anything else, an unabashed duality, a vibrancy existing in public. You wonder if this makes all of your years spent outside of the closet irrelevant.

You wish then that you had never done cocaine that night, not because you don’t like it but because it made you talk, talk to people at the party, talk to strangers, talk to anyone that will listen, talk to him.

It’s at the crash of it all, a conversation you’ve been avoiding, when the inevitable erupts. He’s the one to call for the severance, says it’s just honesty, realistic, and you think you’ve never heard fear come out so clearly disguised as other words. You want it to be like a movie, one where saying “I’m right here” is enough to pull someone out from the depths of themselves, back into reality, into welcoming the love they deserve. But you can tell he’s mastered the repression so well it wouldn’t even emerge if you tugged it out of him like a rope. As final beg you ask, what if it’s just sex then and none of the rest? When his hands retreat to his pockets, that’s when you know there is nothing to salvage.

He asks if you can be friends, says he would like that, and you tell him no, not because you don’t want him around anymore or because it would hurt too much, but because you don’t know how to be just his friend. Because you never were. Because if you hadn’t fucked like rabid rodents behind a trash can on an intended one-night stand that refused to sit, you probably never would have gotten here. Because you thought maybe you could bring him out of himself, like coaxing a kitten out from underneath a back porch. Because it’s always on their terms, when it’s convenient, when it isn’t. Because you were never friends, you couldn’t be, it doesn’t work like that.

You eat chocolate from a bulk bag and laugh about your vulnerability, how it has grown to be something you are incapable of keeping to yourself, always a weight lifted off of your frame when shared. You hand it out because it goes easy. You think for all of the loss, there is more to be won from it.

That doesn’t mean there isn’t any ache. The first week is a withdrawal of some sort and your body knows it too. Your belly cramps and your head pounds and you’re fucking hornier than you’ve ever been in your entire life, feels like your dick might jump off your body and crawl its way back to him. By the second week, the cramps have subsided and you’ve managed to calm your libido but your hands still curl to find his in the dark.

You feel weighed down by the sweetness, the soft, the too tender displays of affection you took careful note of without trying. You remember that he liked to see your teeth peek out from under your fat lips when you smiled. He called it dumb, your smile, made dumb sound like beautiful, made you feel like it too. Dumb. You’ve never wanted to be anything so badly in your entire life.

But you know a thing or two about cleaning, learned from the women in your family how to fix a mess easy. So you delete the texts you know he never kept and have a friend change his name in your contacts to something inconspicuous, indecipherable. In a day, he’s as gone from your phone as calculus was from your brain post college graduation. You pull him from your life like your Sunday routine. Change the sheets, organize your desk, gather trash around the house for the next day, to be taken out tomorrow. This is how you will rid yourself of all of the excess, and the unwanted; a familiarity you hope to someday know less of.

Danielle Shorr (she/her) is an MFA alum and professor of disability rhetoric and creative writing at Chapman University. She has a fear of commitment in regard to novel writing and an affinity for wiener dogs. Her work has been published by Lunch Ticket, Vassar Review, Hobart, Split Lip, The Florida Review, etc. and is forthcoming in The New Orleans Review.

Nicola Brayan is a young, aspiring artist from Sydney, Australia. She has rediscovered her passion for art during the pandemic. She uses vivid colours and contrast to capture emotions and expression. Her work is a love letter to what it means to be human. More of her work can be found on Instagram at @an.aesthetic.mirror.