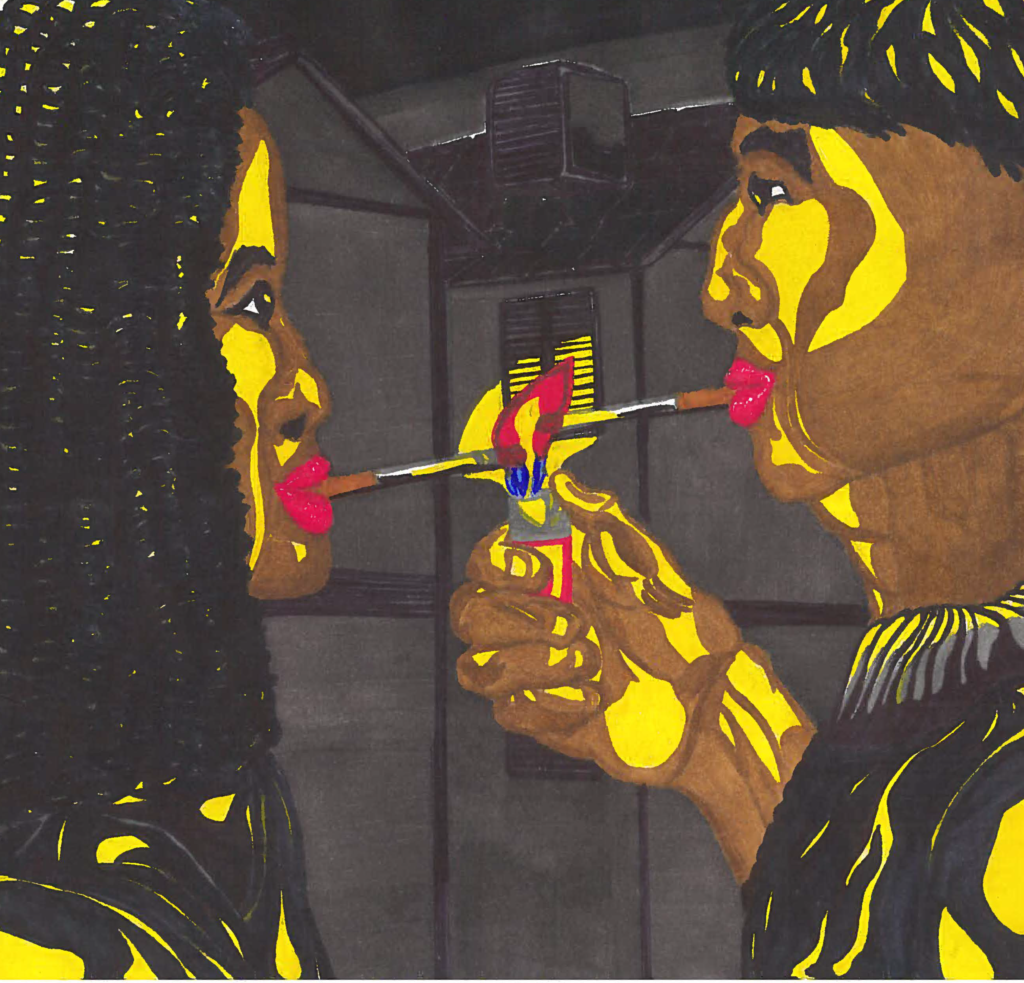 My lover from the future says I am dead in his time.

My lover from the future also says the present me is of “lower energy density.” He shoots lasers in wind tunnels for a living: dissociates naturally occurring nitrogen, watches the atoms recombine in an artificial fluorescence, measures the movement under a high-speed camera. A contrived reunion of tiny things, I think. I also think he’s waiting for me to ask about its real-life applications, but I can already guess NASA is pouring money into this. Or maybe he’s waiting for me to ask how I die. I eye his near-empty mug, the bottom covered by green tea leaves, and pour him some more hot water.

“You know, you’re not like how you are in my time,” he says. He pauses on the “know” like I’m supposed to know what he’s going to say so why even say it, but I’m thinking if it’s not said, how am I supposed to know anything.

“Well, people change,” I reply. He nods and stares into his mug like he knows something I don’t, which he does, which is frustrating, but I keep my mouth shut. Because he wants me to ask, I don’t want to ask.

He stands up and walks over to the shelves cluttered with books: “INTRODUCTION to the THERMODYNAMICS of MATERIAL” fifth edition, Wicked, a high school yearbook, a binder stuffed with holiday candy bar wrap designs. The Roomba comes whirring toward his feet. He sidesteps it, his gaze still fixed on the shelves.

I pick at the dried, dead skin at the corners of my fingernails and don’t realize that I’ve dug into live skin until I see raw red sticky bits and register the sting a second later, and I mentally command the Roomba to come back to me, to suck up the skin flurrying down to the floor, just anywhere but near him, because he lets the machine vacuum around him without a glance, like he knows there’s no Roomba in the future so it might as well be dead—my trusty robot that picks up all the hair and lint and apple seeds that drop when I’m chomping into Granny Smiths while watching YouTube videos, dead—so I will it with all my telepathic powers, which I’d always secretly thought would manifest when I needed them most, for it to return. But the stupid, noisy, disk hits a wall and spins back toward him.

He turns away from the shelves and looks at me. His eyes trail down to my hand.

“You’re always picking at your skin,” he says. “It doesn’t do you any good. Just let things fall away naturally. You’ll only create a scab that you’ll try to pick at again.”

Why does he need to tell me this? Of course, I already know that. If it were so easy to stop a bad habit just by knowing the best thing to do, I’d be walking perfection: I’d fulfill all of my daily vitamin and mineral requirements without supplements; I’d be promoted into a senior management position instead of continuing to report to the guy who convinced me I needed another year of experience writing status reports; I’d call my parents once a week so they’d know they still have someone to rely on once they’re laid off—which they will be, they’re waiting for it, they’re coasting and hoping for a good package with maybe a full year’s worth of salary. But I know reality is just settling and compromising and accepting some things will never go away, not if you forget it, not if you build yourself a new life with new people and new shampoo and new silverware not stolen years ago from the college dining hall, so no, I’ll be picking at my skin forever, and there had better be a Roomba in the future or else dead bits of me will be everywhere.

I wonder how I found this guy. A dating app? A future coworker? A friend of a friend united through mutual interest? I wonder what it took for me to say yes, what could beat the logic of living alone: no fighting over the thermostat, eating only what I like, keeping what I care about clean and neglecting everything else, not having to exercise my vocal cords for long periods of time.

My mom used to say that I had no “living standards” because I don’t buy shrimp since it costs more than twice the price of eggs or chicken breast, or maybe it was because I skipped all of my company’s holiday socials including that one time they invited everyone on a weekend cruise to the Caribbean. It’s not a living standard, I just have different priorities, I had told her, which was as good as crushing her hopes for a son-in-law to pass down all the gold jewelry she had been saving for my wedding and the two-point-five grandchildren.

“Down the hall,” I say, pointing to the lone door across the living room. He walks over. I follow.

I suppose I already knew he’d want to go into my room, and some part of me feels it doesn’t matter that socks and shirts are hanging off the bedpost, that I’d forgotten to throw out the stack of protein bar wrappers, that empty bottles of Adderall and melatonin have been accumulating on my nightstand. He opens the door and we walk in.

“A lot of entropy,” he comments more to himself than to me.

He traces a finger along the crack in the mug sitting on my nightstand, the casualty of a small mishap: it had been summer and the air conditioning refused to start and I needed ice water fast so I stuck the mug full of water in the freezer, planning on taking it out when it formed a thin, icy surface, but forgot about it and the whole thing froze, so I left it out on the counter to melt, and only when the ice became water did I remember that fluids lose the fixed linear dimensions of their solid counterparts, so the contracted volume cracked the mug straight down the middle.

“You still have this,” he says. “I got it fixed in the lab, but I think the 2-part epoxy causes cancer, so we don’t use it anymore.”

“Everything causes cancer,” I say.

“Isn’t that the truth,” he murmurs as he picks up a stuffed porcupine sitting in a mug painted with Tweety’s huge, yellow face and I stare at its blue eyes topped with unnaturally long eyelashes—I can’t even remember where I got it—maybe from my middle school friend, Jess, who had two dogs and three cats so everyone loved her and wanted to play with her pets including me, but she was also nice on her own and remembered my birthday and would always get me something even though I never remembered her birthday or anyone’s, for that matter, because you get older every day so what big difference does a birthday make? Jess had Type I diabetes and probably spent more time in the ER than in school when we were growing up. I don’t remember why we lost contact either. Probably time, distance, the fact that she’d probably die early, the normal things that get in the way.

I place my hands on my hips, hoping he might notice my transition to a more aggressive, impatient stance. But he’s back to looking at the ugly blue-yellow-red-colored lamp that my mom said was unique when she bought it for me, the half-empty red suitcase leaning against a wall so I’m prepared to leave at a moment’s notice, the pale purple and orange Paper Shaper scissors that I use to cut off new clothing labels because I don’t have any normal scissors that cut in straight lines—no, that’d be too easy.

“Well, are you done? Did you find what you’re looking for? How are you getting back—” I pause, contemplating if finishing my sentence means I accept everything he says as truth, “to your time? Aren’t you afraid we might not get together now that we’ve met?”

He sends me a smile, the type you make when you watch sea turtle hatchlings flip and flop from the sand into the sea, like maybe there’s something better out there, a world of infinite potential. But I wonder what’s so great about that: growing up, getting married, having kids, retiring old and weary and well-traveled, when instead you can live as though time stands still. Maybe it’s not happiness, but there are things worse than not-happiness.

“What happens will happen,” is his response.

“Huh, you must not have loved me very much.” I’m a little annoyed how he seems to know everything about me and I know nothing about him, even though I don’t consider present-me the same as future-me. I expect him to lash out, or stare at me with that deprecating I-know-the-future-not-you gaze that I used to see in teachers. Instead, he looks at his hands. I look at them too: they’re huge, maybe double the size of mine, which isn’t saying much since I had never been able to comfortably stretch my hands across piano octaves, a shortcoming that killed my instrumental pursuit early in its incipience.

“I don’t know,” he says. “But love doesn’t mean much, right? It’s just an abstraction used to sweep things under the rug.”

Now he’s thinking more along my train of thought. I nod. I realize I can suddenly see the outline of my drawers through his body.

“Are we happy together?” I ask.

My parents think I’m socially incompetent, a recluse buried in manga comprised of cookie-cutter characters, but they don’t know I’ve been to a few group blind dates at karaoke bars, having hotpot with strangers, laughing about experiences we claim to be shared, knocking shoulders by accident which leads to more shoulder bumping probably not by accident which leads to a night where my body sinks into another’s and I send my mind elsewhere, scheduled to return the next morning when I prepare hot congee topped with fried garlic and dried pork sung, which always impresses, makes them want to stay and chat, even though I don’t do this regularly, don’t cook or eat breakfast regularly, don’t fry garlic regularly because it dirties my pan with grease that gets all over my hands unless I scrub with detergent until my hands crack. And he wonders why I’m always picking at my skin.

Maybe he can’t hear anymore, his form growing translucent, fading out like the fog I can spot if I wake up early enough and care to pull open the curtains.

“Stay healthy,” he says. “Get enough exercise, get enough sleep, keep your neck straight while staring at your computer.”

“Ok,” I reply. He’s starting to sound like my mom.

“Really?” he asks, now a specter in front of me. I resist swiping my hand at him to see if it’ll go through his body.

“I mean, how else am I supposed to live?”

He’s gone. I stand in the empty room, listening to the loud ticks of my Hello Kitty clock—which I really should toss out because one wrong move and it starts spinning and flashing and blaring a high-pitched, giggly song for a solid minute, but it was a gift and even though no one is watching, it hurts to trash something well-intended—and I wonder why it had to be my future when he had one of his own.

Lucy Zhang writes, codes, and watches anime. Her work has appeared in Contrary, Lost Balloon, New Delta Review, Hypertext, EX/POST and elsewhere. She is an editor for Heavy Feather Review and assistant fiction editor for Pithead Chapel. Find her at https://kowaretasekai.wordpress.com/ or on Twitter @Dango_Ramen.