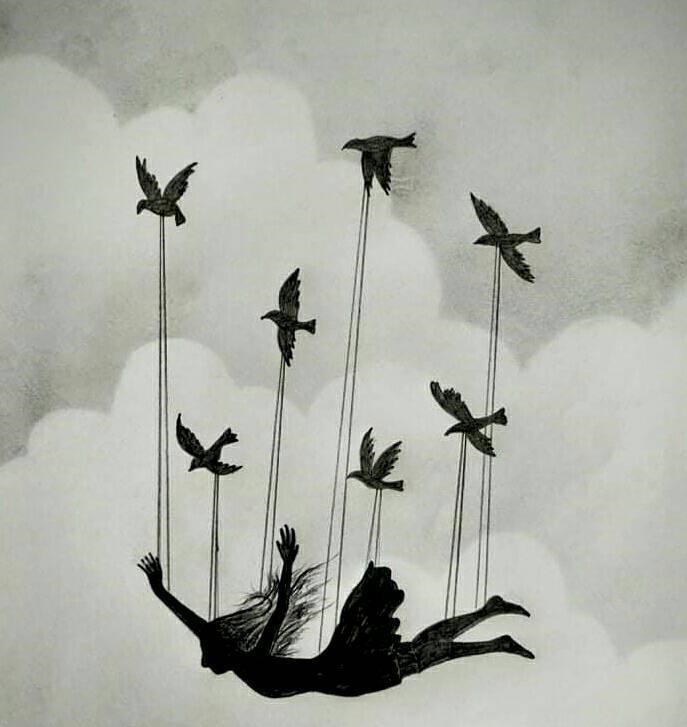 Wife #2 was sweeping the small bedroom when she found the magazine. A woman with long blond hair adorned the cover. A short yellow dress hugged her body, and her teeth were unnaturally white. They were not allowed magazines. Her first instinct was to turn in Wife #3, but then she remembered what He had told them about reacting hastily. Plus #3 was new, young. Maybe she should give her a chance. So instead she closed the door, sat on the bed, and opened the magazine.

At dinner, Wife #2 was peeling potatoes while Wife #1 prepared the meat. He liked it rare, and only #1 knew when to take it out of the oven at just the right time. Wife #3 was in the dining room with Him learning the schedule. #2 knew she should focus on the potatoes—consistent even peels—or at least be memorizing her new days and duties. Tuesdays and Fridays were her new sleep nights with Him. As for the delegation of house chores, she would have to write it down anyway. But she couldn’t keep her mind from drifting back to the magazine. “18 Positions to Help You Orgasm”; “Run Right, Eat Light, Look Tight”; “20 Best Bakeries in Paris”; “A Single Woman’s Guide to Starting Her Own Business.”

Wife #2’s mother had also been a #2. She instilled in her it was the best position a woman could attain. Cared for. Provided for. Protected. Loved. The #1’s had too much responsibility and bore the brunt of multiple pregnancies. And #3-5’s didn’t always get proper respect from the other wives and had the more laborious household duties. And of course solos only led to a life of sin. Wife #2 knew her mother was right.

She went to bed that night praying God would give her strength and guidance, help her fulfill her role dutifully, without wandering in thought. But still: “These Outfits Will Actually Make You Want to Hike!”; “What Kind of Lover You Are, According to Astrology”; “10 Ways Even YOU Can Live Like a Kardashian.”

Wife #2 woke with resolve. She would tell Him what #3 brought into the house. For if there was one magazine in plain sight, clearly there must be other restricted items. Wife #2 was strong, and she would not be swayed by the silly temptation of a couple illicit articles and perfume ads that smelled of exotic fruits. Maybe she would even be rewarded for her diligence.

She finally found the other wives out in the front yard. Wife #1 was showing #3 how to prune the rose bushes. How to clip only the right ones for the table centerpiece. She herself had received this lesson years ago, but she remembered it well. You must clip the flowers that don’t look ready. The ones that have potential for beauty, but have not yet begun to open. Those you cut and bring inside, for He loved to watch the delicate petals unfold slowly, timid yet eager.

When she inquired about His whereabouts, #1 said He was in the side yard stacking the fresh cut wood. Wife #2 offered #3 a sympathetic look before turning to go. But striding across the well-manicured lawn, she heard a sound. The metal latch of the front gate was banging together as the wind blew. The gate was open. Wife #2 figured He must not have closed it all the way when He brought in the wood. Instinctually, she took a step to go fasten the latch. The front gate should never remain open. The gate led to the long driveway that led to the bumpy dirt road that led to the main road that led to the highway that led to, well, she wasn’t sure. No, she had a task at hand. Pivoting on her heels, she strode with a quicker pace now to tell Him what she had found. She walked with purpose, her outdoor slippers squeaking loudly as she walked across the grass. But louder still was the open gate, the latch clanging behind her as the wind blew stronger.

Faisal Mahmud Arnob is a writer and artist who was born in Dhaka, Bangladesh. Since his childhood, he has been showing passion for poetry, short stories, and artworks, which led him to contribute to multiple periodicals and magazines including Cathalbui Poetry Anthology, MAWbiz Creative Corner, and JAR Book. He was a Silver award winner of Queen’s Commonwealth Essay Competition 2021 and was placed in Asia top 10 finalists in the Voice of Peace: International Poetry and Short Story Competition 2021. To contact, you can email him at faisalarnob25@gmail.com.